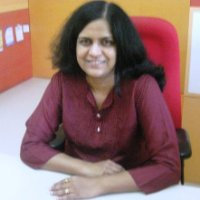 Smita is a Principal Scientist and leads Requirements Engineering research (a part of the Data and Decision Sciences Research Area at TCS Research (TRDDC), India. Her research in Requirements Engineering has led to a method and tool-set that has been employed in several large business-critical systems within and outside of TCS over the last 15 years. Along with her team, she conceptualized, wrote, published, and patented a method for which she also developed a toolset (MAPAGILE) that has been deployed in several large business systems in TCS. Recently, as a leader of a Research and Innovation program on Regulatory Compliance, Smita and her team evolved an approach anchored in theoretical constructs from Behavioral Science. Smita has supervised researchers, designers, and architects who have gone on to lead small teams within the company or have been inspired towards an academic pursuit in universities in USA and Europe. Her productive academic collaborations at TRDDC with accomplished academicians are anchored in her goal to bridge the ever-widening gap between research and practice. \For her achievements, she has been designated as a Distinguished Engineer, an award conferred in recognition of her contribution to an enhanced research footprint and value creation for her company.