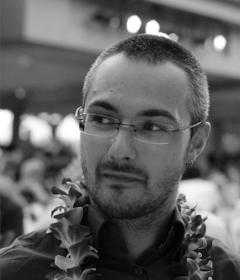 Romain Robbes is an Associate Professor at the Free University of Bozen-Bolzano, in the SwSE research group, where he works since April 2017. Before that, he was an Assistant, then Associate Professor at the University of Chile (Computer Science Department), in the PLEIAD research lab. He earned his PhD in 2008 from the University of Lugano, Switzerland and received his Master’s degree from the University of Caen, France. His research interests lie in Empirical Software Engineering, including, but not limited to, Mining Software Repositories. He authored more than 60 papers on these topics, including top software engineering and programming languages venues such as ICSE, FSE, ASE, EMSE, ECOOP, or OOPSLA, received best paper awards at WCRE 2009 and MSR 2011, and was the recipient of a Microsoft SEIF award 2011. He has served in the organizing and program committees of many software engineering conferences (ICSE, MSR, WCRE, ICSME, OOPSLA, ECOOP, IWPSE, and others) and serves on the Editorial Board of EMSE.